Our Leeds short story course at the Carriageworks Theatre, tutored by SJ Bradley, comes to an end, enjoy the last installment of course participant Monica Dickson’s guest blog series as she shares her experiences of taking part.
Read her account of Workshop 1 HERE
Workshop 2 HERE
Workshop 3 HERE
Workshop 5 HERE
We’ve announced our next two short story courses, starting in Leicester and Bradford in April 2019, please check out our website for details.
But for those who can’t wait for the next course to start, or aren’t able to, check out our ‘Understanding the Short Story‘ page on our website; there you can find exercises, reading lists, and information about key short story theory, all for free.

The final workshop of the Leeds Comma Press Short Story Course with author SJ Bradley focussed on writing longer pieces and maintaining narrative tension using our prior reading of Herman Melville, Volume 1 by Victor Lodato as a jumping off point.

The story begins with a focus on the relationship between a homeless couple, told in close third person through a young, unnamed female protagonist. We gradually realise that her ‘boyfriend’, the “intense, slightly feral” Evan, is absent and we never actually meet him. However there are many layers to this story, revealed through a series of ‘smaller’ events that lead the main character (and the reader) to other realisations. SJ chose to unpick this by working backwards from the ending and breaking the story down into to key points or events that are happening in the present. This was, for me, a brilliantly counter-intuitive and creative way of looking at it and helped separate out these ‘moments’, which might have been harder to spot from a chronological perspective.

We then went on to analyse particular scenes – the way the shower scene switches between past and present, for example, and we also looked in more depth at the longer scene between the girl and the woman, who coerces the girl into coming home with her. This scene is key in that it moves the story forward, slowly revealing information about the girl’s past, tying together her history and contrasting it with the woman’s. We also switch between the woman as ‘rescuer’ and abuser as she becomes more drunk and emotionally manipulative.

Our discussion raised the question of how it is possible to write a story using so few characters and yet still show change. In Herman Melville, Volume 1 not much ‘happens’ in one sense but Victor Lodato manages to create complex and believable characters whilst at the same time showing a subtle change in the way that the characters feel about each other: that is what drives the tension. Both the reader and the girl are made to feel at first uncomfortable about the woman and then sorry for her. Without giving too much away, this scene also goes some way towards answering ‘what is going to happen to the girl?’ a question posed from the outset, and which we continue to ask ourselves throughout. Suffice to say, the girl is different at the end of the scene from where she is at the start of it.

The group then briefly debated comparisons with the events and themes of Moby Dick itself – these were noticeable only to those who had read the book, of course (and I’m not one of them) but we all seemed to agree that nothing is lost by not having read it, as the references work on their own merit within Lodato’s story. (The girl hasn’t read it, “though of course she knows it’s about a whale.” She asks the woman if she’s ever read it: “Oh God, yes,” the woman says. “Dreadful book.”)

We ended our discussion with an overview of the techniques Victor Lodato uses in Herman Melville, Volume 1, in our own short stories and the sort of things we could be thinking about, including:

The workshop, and the course, ended with a discussion about submitting to journals and competitions and SJ suggested some routes to publication. For some of us this would start with the stories inspired by, written and edited during this course and due to appear in a forthcoming Comma Press eBook anthology, a fantastic opportunity for short story course participants to showcase their work.

The Leeds Comma Press Short Story Course has been genuinely brilliant, covering such a broad range of techniques, styles and exercises and introducing me to stories and writers that I perhaps wouldn’t otherwise have discovered. It’s impacted on the way I think about, approach and edit my own writing. And the writing of this blog has in itself been a fantastic opportunity to explore and reflect on what I’ve learned – a huge bonus, adding another layer to my process. 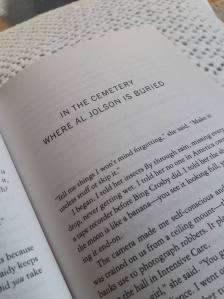 All good things must come to an end as the cliché would have it, but the learning will continue. Thinking about how my writing and understanding of short stories and has developed over the last six months I am reminded of the MC in Amy Hempel’s In The Cemetery Where Al Jolson Is Buried, enrolling on her ‘Fear of Flying’ course. When asked “What is your worst fear?” she answers “That I will finish this course and still be afraid.” Of course I’m still full of insecurities and doubts (typical bloody writer then). But I also have some shiny new tools in my toolkit and a clearer sense of how much more I need to write and read and re-write and edit and FINISH(!) in order to create short stories as accomplished and compelling and powerful as the ones I love to read.

Which, in my book, is a really good place to be.

Monica Dickson is a short fiction writer from Leeds. Her work has appeared in Salomé, Firewords, The Cabinet of Heed, Riggwelter, Ellipsis, Spelk, Dear Damsels and elsewhere. She tweets @Mon_Dickson and blogs at https://writingandthelike.wordpress.com/