The U3A is an organisation that enables retired and semi-retired people to meet and learn together, not for qualifications but for its own reward – the sheer joy of discovery. Members share their skills and life experiences – the learners teach and the teachers learn, and there is no distinction between them.

The Moseley, Kings Heath and District U3A serves the south west of Birmingham, and is comprised of several different interest groups, with a range of literary ones. This month, The Book of Birmingham was featured at their annual literary morning, with appearances from editor, Kavita Bhanot and contributing author, Sibyl Ruth. We spoke to Paul Hunt, leader of the Moseley, Kings Heath and District U3A group about the event.

Also included in this post is a review of The Book of Birmingham by event attendee, Janet Burgess, which you can read below.

Normally we talk about the books that have been read in the last twelve months and nominate our favourite, but this year we were fortunate enough to have Sibyl Ruth, a contributor to, and Kavita Bhanot, the editor of, The Book of Birmingham come to talk to us. 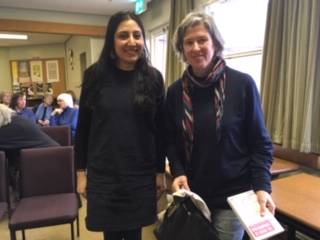 Kavita began by discussing the background to the book and how it came to be published. She explained that it was an anthology of stories from different community perspectives set at significant periods of Birmingham’s 20th century history. Sibyl then read an extract from her story, ‘The Call’, and discussed how the story came to be written.

This was followed by a question and answer session which opened up into a discussion about the changing faces of Birmingham – both human and architectural. Everyone present thoroughly enjoyed listening to Kavita and Sibyl; it was even suggested that there could be a second edition including stories from other communities – for example, the Irish and Polish communities in Birmingham – demonstrating the breadth of stories there are to be told from our city.

From a personal point of view, I really enjoyed reading The Book of Birmingham as, having been born and bred here, I was able to relate to most of the stories geographically yet they provided a different perspective to the events that I lived through. I would recommend The Book of Birmingham to all native “Brummies” and to those looking to find out more about the people who live in Britain’s second city! 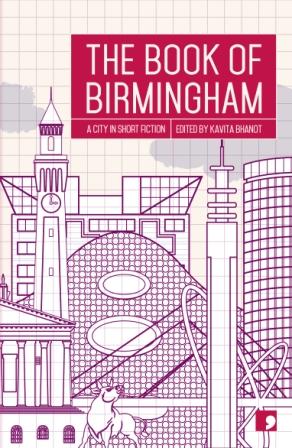 The ten stories in this anthology certainly entertain, inform, and evoke memories for older readers, and give cause to reflect in equal measures. As Kavita Bhanot says in her introduction, Birmingham has had a wonderful ability to re-invent itself, both in terms of its economic bases (a city of a thousand trades) and its physical appearance. I am 66 and have seen three very different Bullrings. These elements have also been reflected in the shifts in population: Digbeth hosts the Irish Centre, Handsworth a culturally rich black community and Sparkbrook the excellent Balti triangle, for example.
Similarly, these stories reflect the ever-changing face of Brum and its inhabitants, spanning some 60 years and starting from the first wave of the Windrush generation. Some tales exemplify the inner courage and determination of newcomers to a suspicious and overtly hostile neighbourhood. ‘ Exterior Paint’ by Kit de Waal is a gentle, heart-warming reminiscence of a mixed marriage by recently widowed Alfonse. A chance sighting of Malcolm X on a Smethwick street emboldens Alfonse to face down Lillian’s pub customers and antagonistic mother. Many years later, judging by the phrase, ‘All the children are brown of one shade or another, in headscarves or corn rows…’ a sense of successful integration and acceptance has occurred.
However, a darker moment is covered in ‘1985’ when Soho Road witnessed black on Asian violence, as tensions flared in a series of drug dealing and organised crime vendettas. The street culture and casual acceptance of tooling up, ‘…everyone was walking about with flick-knives in their back pockets and wanted you to know it…’ is crisply evoked through Balvinder Banga’s keen ear for youth argot, love of brands, films and music from a gang culture hidden from cautious and more conservative older family members.
‘Kindling’ by Jendella Benson unites the themes of both these stories, as it covers a budding mixed relationship between an Asian boy and black girl in Handsworth around the same time as ‘1985’. Benson’s reflection of ignorance of other cultures when different people live in close proximity asks us to reflect on just how much we actually know about each other, or whether we too think in lazy stereotypes:
‘Their religion only lets them sex their wives to have kids…they ain’t allowed to use johnnies or nothing!’
‘Ain’t that Catholics, though?’
‘Catholics, Pakistanis, Jehovah’s Witnesses, it’s all of ’em!’
Lauren and Zee’s tentative Romeo and Juliet style of burgeoning romance offers hope that attitudes and fears can be addressed with positive outcomes.
‘Seep’ by Sharon Duggal portrays the difference in attitude towards integration between generations. The elders, having arrived in the 50’s, believe in a quiet life, aiming ‘to show the English that we are not trouble makers, that we are here just to work and make a better life.’ The younger, Suresh, newly arrived, is not so complaisant, wishing to counter the dangerous ideology of a Wolverhampton politician:
‘We came here to rebuild their country after they tried to destroy ours… They should be grateful to us but instead they treat us like second-class citizens.’
Echoes of Powell’s ‘rivers of blood’ speech from the era of Duggal’s story were muted but surely present in the 2016 Brexit campaign. The stories in The Book of Birmingham help focus today’s readers on the sad truth that integration can be a very thin veneer indeed.What part do we individually and collectively play in welcoming non British people to our country and city?
Aspiration is a driving force for most people.  and improve their lives for themselves and children. Sadly, aspiration is not always enough. In harsh economic downturns, hopes can be dashed. Alan Beard’s bitter-sweet story ‘Taking Doreen out of the Sky ‘ is a reminder that mutual love and regard are what matter when redundancy scuppers plans to escape Peacock Tower.
Rooted in very specific geographical areas, all of these narratives can seem parochial, but their readership deserves to be wide because like all good literature, they expose mankind’s nature and invite us to connect, question and qualify our own lives, hopes and concerns. Explore these landscapes, enjoy the worlds recreated in these imagined characters’ experiences, and listen to the lessons our hearts and consciences hear.
Review by Janet Burgess
The Book of Birmingham is available to order directly from our website at http://www.commapress.co.uk/books/the-book-of-birmingham and is available on Amazon and in all good bookshops.