Like many authors, I’m often asked to what extent my fiction is based on personal experience. Some readers seem unduly preoccupied with finding the writer in the writing; at least, where novelists are concerned. Philip Roth was recently quoted as saying that readers generally assumed his novels were autobiographical, but that when he published a memoir he was accused of making it up. Perhaps this perception is rooted in the hackneyed creative-writing adage: Write what you know. As if real-life experience trumps all other cards in the fiction-writer’s hand – research, for example, or (whisper it) the imagination. Of course, plenty of writers do draw closely on autobiographical material for their novels, sometimes heavily disguised, sometimes draping only the thinnest of fictional veils over the fact.

I never have. None of my eight novels is even loosely autobiographical and none of my characters is a surrogate me. Let me state, for the record, that I have not taken revenge on my former teachers, been a trafficked sex-worker in Amsterdam, become obsessed with tracking down a panther on Ilkley Moor, woken up one morning to find my soul inside someone else’s body,  or been sent to a psychiatric clinic after causing my brother’s death. I don’t even have a brother. A few specific details and incidents in my novels are based on direct experience, it’s true, but the resulting scenes are invariably adaptations rather than replications.

Curiously, though, I have mined my past to provide ideas – sometimes the very premise or plot – for a number of my short stories down the years. Why autobiography should surface only when I’m working with a shorter fictional form, I don’t know. It might simply be that certain isolated episodes in my life have lent themselves to the kind of snapshot a short story can provide but lack the narrative breadth and complication to yield the full photo-album of a novel. Or maybe I just can’t stand my own company for more than a few pages.

Whatever the reason, I can’t argue with the math. While fiction beats autobiography 8-0 in my novels, in my new solo collection, Letters Home – which gathers together stories spanning the twenty-odd years of my writing career – no fewer than four of the twelve pieces originate almost entirely in direct personal experience:

It strikes me, as I reflect on the four pieces, that their autobiographical nature might be fundamental to their conception but it’s the licence I’ve taken with that source material which – I hope – gives it life on the page. Take away the drug-smuggling element and the Indian story would lose most of its tension. The exaggerated behaviour of the Beckhams-fixated dental patient makes for a much better tale than my own response would have done.  Without the inner life of the woman in the Pumpkin, the reader would remain emotionally semi-detached from her ordeal. Even in ‘Unsaid’, the dialogue alone doesn’t convey the full story; by stripping out my own reflections and feelings, I leave spaces between the spoken words for the readers to bring those things to the narrative themselves, to make their version of it.

The more interesting question, then, is not the extent to which a work of fiction is based on the writer’s personal experience. Rather, it’s the extent to which autobiographical events depend on the storyteller’s imagination to convert them into drama. Real life just happens. Stories have to be made.

Letters Home is Martyn Bedford’s first collection of short fiction, including over 20 years of stories. He is also the author of five novels for adults, including Acts of Revision, which won the Yorkshire Post Best First Work Award, and three novels for young adults: Flip (shortlisted for the Costa Children’s Book Award, and winner of four awards including the Sheffield Children’s Book Award and Calderdale Book of the Year), Never Ending, and Twenty Questions for Gloria, winner of the 2017 Coventry Inspiration Book Award. He has been translated into fifteen languages.

You can buy Letters Home now in paperback and in eBook formats, from the Comma Press website,  Amazon, and from your local bookshop. 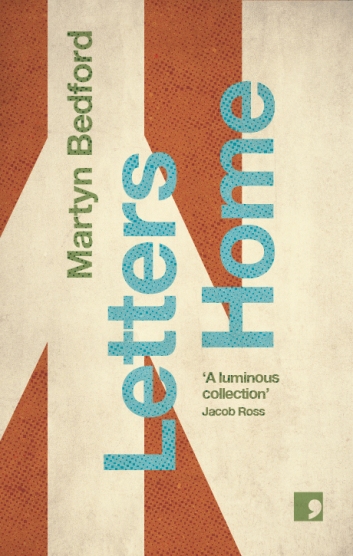