Stepping into the cavernous and modern Geoffrey Manton Building on Friday morning with coffee in hand was initially redolent of being back at university. There was a quiet yet expectant anticipation. Delegates were being accredited and then patiently queuing to choose which of the workshops and seminars to attend at the 3rd National Creative Writing Graduate Fair in Manchester, organised by Comma Press. The timing of the event felt apposite, given Manchester had just been awarded a UNESCO City of Literature status. It was a pleasant surprise to see such a diverse range of people from across the UK in one place, converging for a day immersed in different aspects of writing. This was my first visit, and I was unsure what to expect – what would happen across the next few hours?

I was moved by Luke Kennard’s self-deprecating and amusing opening keynote talk to a rapt audience, which followed the undulating course of his career; from writing poetry 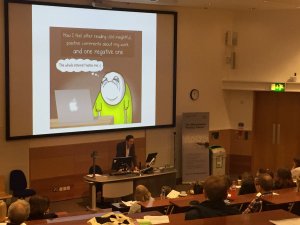 and studying it, to bleak days in Bristol searching for employment, to living back with his parents working in data entry, and finally finding the spark again for his writing. Being accidentally published – when a pamphlet of his work was printed as a book, with an actual spine! – was very funny, a seemingly innocuous turning point which helped to take him in a new direction, reaching a wider audience and different publishers. The narrative thread through his session was why anyone writes, and what they hope to achieve? Why does anyone put words onto paper or type them into a screen? It was a question which would occupy me all day. And the reality that everyone’s journey will quite probably take a lot longer than they imagine, certainly I and I am sure many others there could fully empathise with this. Luke’s journey with his writing – volumes of poetry and now a book – was an inspiring and very much grounded story in itself, his arc following a winding and sometimes tough path.

There followed 4 panel discussions before lunch. I found SJ Bradley and Adam Lowe’s perspectives on writing as work of interest in the Balancing Act: Living and Working as a Writer panel. They each had several different writing and non-writing roles – as play rights, novelists, managing writer’s social groups, directors and teachers – and they spoke of how to manage writing as a job, to treat it as such and have structured days and weeks in order to be productive. Even simple suggestions like turning off your phone for work or leaving it in another room, and not writing emails deep into the night, is something I am sure a lot of us are guilty of. It was practical advice for creative endeavour, two sides which don’t always mix well; I found myself planning my next writing sessions cut off from the outside world.

I have always valued the tangible feel (and sometimes smell) of printed pages in a book, so was interested to see how the panel on technology on books would affect me. Going Digital: New Opportunities for Writers offered three perspectives; Kathryn Taussig, Michelle Green and Kit Caless spoke of their passions for writing in the digital age, from contributing to stories on Twitter to focusing purely on eBook publication, eschewing print entirely. The digital side of writing has lots of new avenues to expand into.

After reflecting on the morning’s content and discussion during lunch, the second half of the fair began. First up was perhaps what many writers dread the most – with myself very much included – writing the synopsis of their book. The Writing the Perfect Synopsis with ​Mslexia session offered a structured method in composition which was really helpful. I was also surprised at how agents read the material submitted to them, according to Debbie Taylor, who hosted the workshop – letter first, then the opening pages, and finally the synopsis. It gave me a different appreciation on the material submitted and how it could be received.

Later, I was particularly struck by Rochelle Bugg’s candid insight into her blog and book deal written about the loss of her parents. Her words were brave and insightful and she had the room captivated. It was a part of the Book Publicity Masterclass with Bookollective workshop with Esther Harris, around how to market yourself and your book. There was plenty to think about in terms of maximising such publicity, either around your book or yourself – or both.

The second half of the day also featured the chance to pitch to two literary agents from London, with tables and pairs of chairs arranged on the ground floor of the atrium. 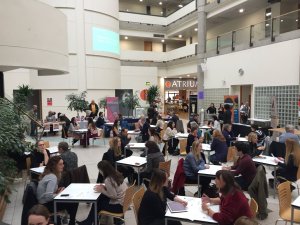 This was both tantalising and extremely nerve-wracking too, as I wondered how to use the allotted 15 minutes as effectively as possible. I tried to stay calm, watching the quick-fire agent-speed-dating with other delegates.

I had two very different and equally helpful sessions during the afternoon; in the first, Kerry Glencorse from Susanna Lea Associates read the opening pages, synopsis and covering letter for my novel and was able to give really useful and encouraging feedback. My heart was racing as Kerry read the start of my novel! Then I met Rachel Conway from Georgina Capel. I asked if she could read the material, and instead she asked me to talk about my novel and my writing history; this put me on the spot and my nerves flared up a little, but it was also a great chance to explain the story. Kerry and Rachel were both lovely and very friendly, and it was a brilliant opportunity to meet them – and also a little bit surreal – being sat with two leading agents.

It was inspiring to see such a diverse range of writers coming together for such an illuminating and brilliantly organised day, all at different stages of their careers; there was a lovely sense of community between everyone from start to finish. I left with plenty of new ideas and also found current ones changing in new and exciting ways; I also realised the reason I write is for personal pleasure and also hopefully to one day engage my ideas with readers, too. It was a great day, and I look forward to the 4th year in 2018!