Did you know that, worldwide, there are between six and seven thousand different languages spoken today and that at least half the world’s population are either bilingual or plurilingual?[1]

Comma Press prides itself in translating a large number of books from all across the world, some of which we featured in our blog post celebrating Women in Translation Month.  Although some of our most famous translated books are from the Middle East, such as Iraqi Christ and The Book of Gaza, Comma also showcases  works from across Europe and has achieved great success, through series such as Reading the City, and through prizes, as we were extremely proud of Larissa Boehning, whose short story collection Swallow Summer, translated by Lyn Marven, has been longlisted for the Warwick Prize for Women in Translation.

In celebration of today, we have compiled a small reading list of our published and forthcoming books that have been translated into English from countries throughout Europe. In a post-Brexit world, it is important to continue to remember that, although we are no longer going to be part of the European Union, we are still part of Europe, and so it is vital that we continue to promote European literature in the UK, and celebrate European Languages.

ReBerth: Stories from Cities on the Edge 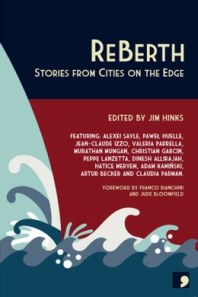 The six European port cities known as the ‘Cities on the Edge’ – Liverpool, Bremen, Gdansk, Istanbul, Marseilles and Naples – share a history of dissent, diversity and economic reinvention. Once gateways to the world, bringing wealth and innovation to their respective nations, they’ve long been maligned and misunderstood by their compatriots, preferring instead to look outwards, towards the sea – to the possibilities of change, of travel and of rebirth.

Featuring short stories by twelve acclaimed writers from the Cities on the Edge, ReBerth explores these landscapes of change – the social tensions, the scars of war and economic decline, the attempts at regeneration, and the startling and sometimes unsavoury secrets of how these cities’ inhabitants thrive and survive.

What do we mean by small town? How has this innocuous term – one up from ‘village’, a couple down from ‘city’ – come to function as a pejorative? Pressed to describe what the phrase ‘small town’ conjures up, we’d be hard pushed to say anything positive: closed-minded; petty; provincial; parochial. On a broad European canvas, however, the rich traditions of short story writing challenge these preconceptions. The stories collected here are neither narrow-minded nor petty, nor do the minds of their protagonists contract to fit their environment.

Decapolis, which means ‘ten cities’ in Greek, is a book which imagines the city otherwise. Bringing together ten writers from across Europe, it offers snapshots of their native cities, freezing for a moment the characters and complexities that define them. Ten cities: diverse, incompatible, contradictory – in everything from language to landscape.

Each character in Larissa Boehning’s debut collection experiences a moment where they’re forced to confront how differently things turned out, how quickly ambitions were shelved, or how easily people change. Former colleagues meet up to reminisce about the failed agency they used to work for; brothers-in-law find themselves co-habiting long after the one person they had in common passed away; fellow performers watch as their careers slowly drift in opposite directions. Boehning’s stories offer a rich store of metaphors for this abandonment: the downed tools of a deserted East German factory, lying exactly where they were dropped the day Communism fell; the old, collected cameras of a late father that seem to stare, wide-eyed, at the world he left behind. And yet, underpinning this abandonment, there is also great resilience. Like the cat spotted by a demolition worker in the penultimate story that sits, unflinching, as its home is bulldozed around it, certain spirits abide.

This book is currently longlisted for the Warwick Prize for Women in Translation.

As well as reading these amazing titles, we are currently in the process of publishing two more exciting short story collections:

Polish-British Joseph Conrad is regarded as one of the greatest novelists to write in the English language. To celebrate his name, as well as his vision, this anthology brings together specially commissioned short stories and essays, written in English or Polish (the latter being translated into English), which celebrate, respond to and critique the literary legacy of Joseph Conrad.

Including 16 of Britain and Poland’s most revered fiction writers and critics, this collection will demonstrate Conrad’s enduring relevance in both countries, bringing together the themes that shaped his own life and work – the sea, colonialism, war, travel – in conceptual essays, near futuristic tales, and new journeys through the heart of darkness, cementing Conrad as a ‘true citizen of the world’.

This book is available to preorder from our website now, and we have some exciting events scheduled with some of the authors in the next two months!

The Book of Tbilisi

Tbilisi is the largest city and capital of Georgia, with a population of more than 1.5 million people. Located at the crossroads of Europe and Asia, this vibrant city is a melting pot of different ethnic groups and languages, having been fought over by rival empires and powers for centuries. This complex history of foreign dominance and control is reflected in both the literature and architecture of the city, which is a mix of Middle Eastern, Art Nouveau, Stalinist and Modernism.

[1] Facts taken from the European Day of Languages website.