As it’s World Book Day we thought we’d take the time to reminisce about the books that we enjoyed as children, and which inevitably shaped our reading habits and inspired us to get into publishing in the first place. Unfortunately we don’t have any embarrassing pictures of us dressed up (I, personally, have some absolute corkers but couldn’t find them anywhere… I swear), but we hope that this small insight into our literary lives persuades you to take a few minutes to think about your own book history. We’d all be out of a job if great children’s books didn’t keep inspiring new generations of readers so, for our sake, make sure you encourage any kids you have lying around to get reading!

Growing up in a big family (6 kids), books were a very communal thing. Mum or Dad’s voice would cast a deep spell over a captive, sleepy audience each night, as they worked their way through Roald Dahl’s entire ouevre – Danny the Champion of the World was my brother Che’s hero; he followed in Danny’s footsteps, I followed in Che’s – then they’d move on to more ambitious reads like Orwell’s Animal Farm, which Dad would commentate on throughout (‘You have to understand, Eric Blair was a bit of sell out by this point…’ ‘Yes, Dad.’). In fact Dad’s love of that book led him to set up a small holding of his own, which centred around pigs, of course – so it felt at times like we were living in Animal Farm. My favourite of these bedtime reads, though, was Anne Born’s I Am David, the story of a young boy’s escape from an unspecified concentration in Eastern Europe and his long, tortuous attempts to get back home – as much a story about the costs of such a journey as the rewards. Yup, h

At 13, I took it upon myself to read all three tomes of Lord of the Rings, which I adored. Although it took me so long to get through I remember being quite upset when I eventually finished it –  it had taken up so much of my life, I knew I was going to miss reading it.

At 14, I lost interest in fiction for a while and turned to physics books. Frank Close’s Cosmic Onion got me started; but it was Paul Davies’ The Accidental Universe that really blew my tiny mind. After that there was no going back. I had gone full geek.

I’m going to try and steer clear of the cliché I love Harry Potter (always have always will) in
this exploration of my childhood reading habits, and try and show some variety. My earliest memories of literature are books like Dear Zoo, Spot the Dog, The Tiger Who Came To Tea, in my opinion the most timeless of books for the youngest readers. Later came Beatrix Potter and a world of furry creatures in adorable outf

its; I believe I had the full set on the shelf in my bedroom. I had a teacher in school who loved Roald Dahl and he passed on this love to his students by reading to us from one of Dahl’s books every Friday before home-time – The Witches and Esio Trot were my particular favourites, I remember.

As I progressed through primary school and my reading tastes matured, I found my favourite authors: Michael Morpurgo’s stories – in particular War Horse, Private Peaceful and Kensuke’s Kingdom – have always stayed with me and it’s been wonderful to see some adapted in recent years. Jacqueline Wilson – from a love borne out of reading Lola Rose I was soon galloping through her backlist from Love Lessons to Midnight to Clean Break, which I think was my last Wilson read before I moved on to the likes of Meg Cabot and Malorie Blackman in high school.

11-12 year old me had a new favourite author though, and that was the great Anthony Horowitz, after discovering his Diamond Brother series, and then the brilliant Alex Rider books. My inner-child is still excited by the fact that a new Alex Rider book is out later this year; I think I will have to pick up a copy and get lost in the nostalgia.

As you can see quite a mix, but I think I could pick up any one of these books now and still enjoy and relate to them now as a 22-year old. I’d be transported back to my childhood bedroom reading under the covers, or being read to in a classroom, or the tiny library in my primary school, a place I don’t think I will ever forget because it’s the place where I found all these books and could read them for free and at my leisure. So on World Book Day I think there’s no better place to start than your library if you want something new and wonderful to read!

My parents often tell me about how when I was little, I wouldn’t really sleep very much; rather, I’d spend the night ‘pottering’, clambering around my room looking for the perfect book to wake up with on my face in the morning. I can’t exactly remember what I was reading at that time, but I have strange and sparkly memories of these fairy books that showed you how to cast spells and make perfume out of flowers from the garden (sorry dad). Lots of glitter. Alas, my tastes haven’t changed much. 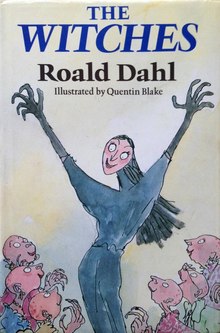 Roald Dahl taught me about humour… and fear. To this day, I have never read more than the first couple of chapters of The Witches. I’d rather watch Saw than have to read that book, such is the terror I feel at the descriptions of those bald, purple eyed, child snatching witches. Likewise with A Series of Unfortunate Events – the sheer weirdness and macabre nature of those books both kept me hooked and gave me nightmares, although I can never remember if I actually read the thirteenth one.

The likes of Louise Rennison, Meg Cabot and Jacqueline Wilson taught me about friendship, sex, and the highs and lows of being a teenage girl in this world. Besides, everyone knows that when you graduate from The Lottie Project up to Girls in Love you are basically a fully fledged woman – right? 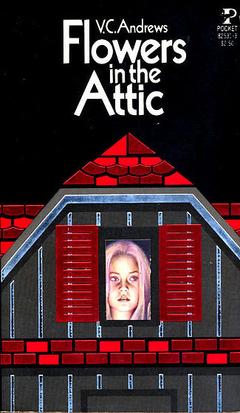 Another of my most intense reading memories also belongs to the avid consumption of Flowers in the Attic, and the Dollenganger series by V.C. Andrews. I only recently found out that this book had actually been banned in several areas and schools in the US due to “the filthiness of the material” and “offensive passages concerning incest and sexual intercourse”. Well, kids will always find that stuff somewhere, and if it gets them reading….

Clichés aside (hmph Becca), I also couldn’t not give the biggest of shout outs to the Harry Potter series, which to this day I still adore and can’t get enough of. The tattered, tea stained, bath-wrinkled books sit pride of place on my bookshelf at home, and have been read countless times. My Dad and I used to race each other reading them, sitting for whole days at a time devouring them immediately after their release, and I have no shame in saying that I went to see the last film twice on the day it was released and cried… also twice.

Alongside The Little Prince, My Naughty Little Sister, Charlotte’s Web and Stig of the Dump, I’m pretty sure that Say Cheese and Die made me the person I am today; that is to say a rampant fatalist with a fear of cameras.

I rattled through most of C. S. Lewis’ Chronicles of Narnia as a child, and once pretended to read The Hobbit (age 9) to impress my older sister. The discovery of Point Horror was, at the time, a revelation … despite the fact that most of the characters and plots were PAINFULLY formulaic. Elizabeth and Jessica Wakefield (Sweet Valley High) also featured heavily in my reading, so perhaps I had a thing for American jocks and impossibly beautiful, blonde teenagers.

I now get to buy books for my friend’s children, and have stumbled across some absolute gems! I really like the gorgeously illustrated Iranian stories published by Tiny Owl, such as The Black Fish and The Elephant’s Umbrella … and would give anything to meet the bear from Jon Klassen’s I Want My Hat Back. I love him.

One thought on “From Dahl to Tolkien, Wilson to Lewis: The Comma team on their favourite children’s books”