Today marks the beginning of Small Press Week 2016, where small presses from around the world will give you exclusive access to daily themed content, in celebration of indie publishing.

Here at Comma Press, a small not-for-profit publisher based in a little office in the great city of Manchester, we have compiled some essential reading relating to today’s SPW theme: the past.

Comma Origins
Comma Press was formed in 2003 by Ra Page who, having firstly developed the Manchester Stories series, as featured in City Life magazine, decided to build on this idea and produce four booklets of short stories embedded within and inspired by cities in the North of England. The Book of Leeds and The Book of Liverpool were the first anthologies published which grew from this original idea, and featured some the cities greatest writers, bringing to its readers the profound ordinariness of the city’s streets and its dwellers, past and present.

Comma Press has since launched a translation imprint, spearheading and promoting Arabic writers specialising in the short story genre, and has thus far published seven collections translated from Arabic:

The Madman of Freedom Square, by Hassan Blasim

The Iraqi Christ, by Hassan Blasim

The Book of Gaza, edited by Atef Abu Saif

The Drone Eats with Me: A Gaza War Diary by Atef Abu Saif

The Book of Khartoum, edited by Raph Cormack & Max Shmookler 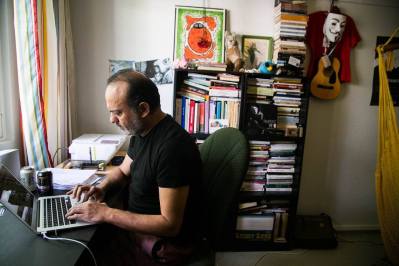 Above (images from Hassan Blasim’s Facebook page): writing in 2002 in a refugee camp, and then in 2016 trying to finish his novel. What a journey we have been on with Hassan over the years and what an inspiring writer for so many people.

Hassan Blasim most recently edited and featured in our collection, Iraq +100. The relationship between Blasim and Comma Press actually goes way back, almost eight years to December 2009 when Hassan’s collection The Madman of Freedom Square was published. This highly spirited and brave collection of stories takes place in the midst of war in Iraq and the beginnings of a new life in Europe. The collection was longlisted for the Independent Foreign Fiction Prize in 2010.
Hassan went on to win the same award in 2014 for The Iraqi Christ, the first collection of short stories to ever win the prize, and also the first Arabic title to win as well.

You can find out more about Hassan Blasim from the man himself, his work and Arabic literature and language in this interview conducted with Comma in 2012.

David Constantine
David is a great Greater Manchester writer, hailing from Salford, who has made great waves of late with his newest release The Life-Writer, which was recently rave-reviewed in the New York Times. He also gained recognition when his short story, ‘In Another Country’, was adapted into the Oscar-nominated film 45 YEARS, starring the stellar Charlotte Rampling and Tom Courtenay, in a story of how revelations from the past can alter and skew a long-married couple’s perceptions of their relationship forever.
David Constantine is no stranger to success however. He not only won the BBC National Short Story Award  in 2010, but also the Frank O’Connor International Short Story Award in 2014 for his collection of short stories Tea at the Midland.

In-keeping with the theme of past, please read this thoughtful piece with Constantine on the immense power of memory, and listen to the accompanying episode.