GUEST BLOG – Morgan Giles, translator of Nao-Cola Yamazaki’s story for The Book of Tokyo, has written a piece on her thoughts, reflections and experience being and becoming a translator of Japanese.

I’ve been translating from Japanese since, to be honest, I could barely read the language. I was an unfocused student, rarely studying because I could make decent grades without bothering, and I was much more interested in the Japanese slang I was learning from the twentysomethings at my part-time job—in short, I was a sixteen year old, albeit with weird interests. I’d sleepwalked through the formal classes available to me, and so Kwak-sensei told me to pick a book to read and translate. I had never read a book in Japanese, and the one I chose was by Risa Wataya, a girl not much older than myself that had just won the Akutagawa Prize, Japan’s most celebrated literary prize. I sent a cheque off and ordered it from a bookstore four hundred miles away, with little idea or concern about what I was getting into.

And then I sat in the school library, two afternoons a week, reading this novel and trying to rewrite it. I’d never thought about translation before and, the truth is, I didn’t really think about it then. All I thought about was how to pull the book apart, get inside of it, and find out how it would work in English. I wish I could remember now what that really felt like—my first translation may have been the last time I did something with that kind of childish, dreamlike instinct, lacking even the words to describe what I was doing or why.

But any translator can tell you what I was doing: I was playing. I had taken my favourite ball, language, and was making up a new game. It didn’t occur to me that this was work, that there were people who did this for a living or that this would become my life’s work. I was just playing, across time and space, with a girl three years older than me. She’d had the first move and now it was my turn. 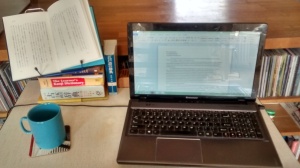 In Japanese, there’s an idiom about the importance of remembering why you started doing something. For me, and for many translators, the ‘why’ can easily get subsumed by the ‘how’: how do I get my work published? How do I get permission to translate this? How do I make a living or, actually, just survive? The daily realization that your love for the work is not enough, is never enough, can be hard to live with. I often find myself misquoting Moomin: “I only want to live in peace and translate novels and dream!”

When the money or the words don’t flow like I wish they would, sometimes I take a break to play. My favourite playmates, and Nao-cola Yamazaki is one of them, remind me of the ‘why’: because it’s fun. Because I can. When I’m sitting in front of an empty page, other people’s rules just fade into nothingness, and suddenly it’s a bright summer evening with hours to go before my mother calls me in for dinner. The ball is in my hands and I can do anything with it. It’s my turn.

Morgan Giles is a translator, reviewer and writer. She has translated works by authors including Nao-Cola Yamazaki, Gen’ichiro Takahashi, and Fumiko Hayashi, and her reviews have appeared in the Times Literary Supplement and at For Books’ Sake and Full Stop. Originally from Kentucky, she lives in London.

Morgan translated ‘Dad, I love you’ by Nao-Cola Yamazaki, for Comma’s The Book of Tokyo.

All images used in this blog post are from Morgan Giles – Thanks Morgan!

2 thoughts on “‘Do you remember the first time?’ – Notes on Translation”